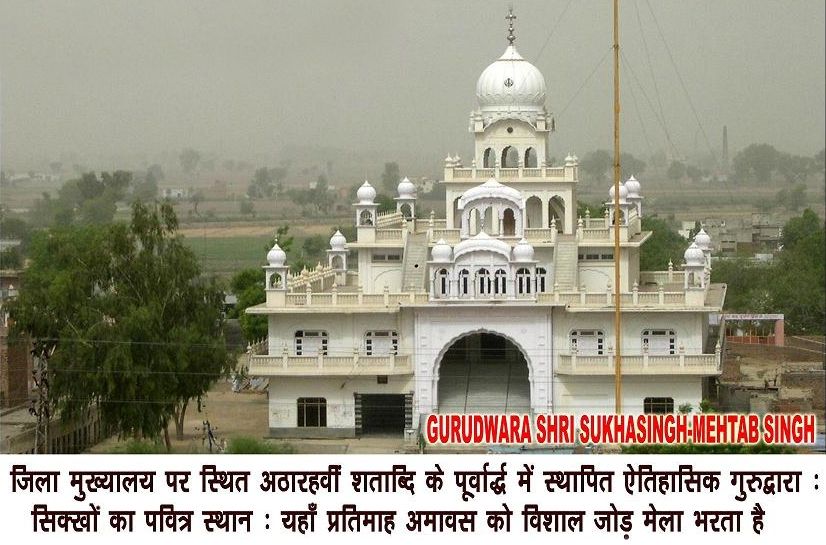 The historically important Gurdwara of Shaheedan Da is located in the city of Hanumangarh. In the 18th century AD, when this gurdwara was constructed, it was named after two martyrs. According to history,when the Emperor of Afghanistan, Nadir Shah was moving back to Persia after looting and plundering numerous Indian cities in 1739, his forces were attacked by the Sikhs who rescued many young women and goods that were stolen by the forces. After his return to Persia, Nadir Shah made Zakhrya Khan to act as the Governor of Lahore who vowed to destroy the Sikhs, for which he declared a reward to anybody who could bring the head of a Sikh. Once a Massa Ranghar brought a cart full of heads of Sikhs to Zakhrya Khan, as a reward to which he was appointed the Chief of Amritsar. Taking charge of the Golden Temple of Amritsar, Massa Ranghar prohibited the Sikhs from entering this temple and started drinking and brought dancers at the pious temple. When this news reached the Bikaner’s Sikhs, they became enraged. Then two Sikhs, namely, Bhai Mehtab Singh and Bhai Sukha Singh went to Amritsar to teach Massa Ranghar a lesson. As they carried bags full of coins, the watchmen didn’t prevent them from entering the Golden Temple. They went to a drunken Massa Ranghar who was watching the dancing girls and placed the bags full of coins in front of him. As he bent to take a look at the bag, these two Sikhs severed his head, took it and vanished from there in no time. These two Sikhs came to Hanumangarh with Massa Ranghar’s head and rested under a tree. Later on they were captured and tortured to death by the Mughals who wanted them to convert to Islam. They refused this offer and attained martyrdom. Every year, in this gurdwara on Amavasya, thousands of devotees attend the Yadgari Jod Mela.

Developed & Marketing with by WEBOO